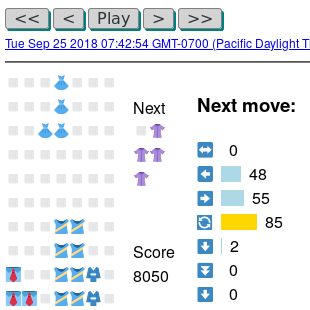 I discovered Joe Sondow's @EmojiTetra, which is a collaborative block-fitting game played via Twitter polls. Think Twitch Plays Pokemon, but with Twitter and Tetris instead.

As I played, I wanted to be able to go back and see what had happened while I was gone, or what had led to the predicaments we inevitably got ourselves into, but scrolling back through the Twitter feed was less than ideal. Thus was the EmojiTetra viewer born.

I built it entirely on Glitch using ExpressJS, and it ran there for months until the database outgrew the disk space allotment. It now runs with Glitch as a frontend, querying my VPS as a backend.