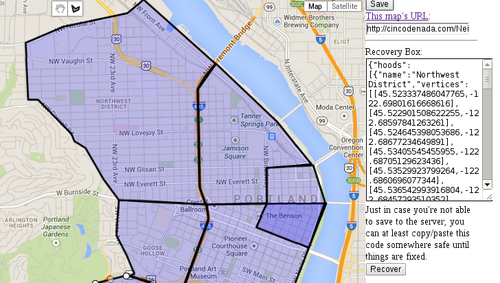 A work in progress, but the basic UI and database functionality are in place. Eventually, I envision it as a site where you can map out the neighborhoods in your town: what they're called, where they are, what their boundaries are. You can put in just a few, or your whole city.

With enough contributions, a map of neighborhoods will emerge that represents the consensus of the community. Some borders will be fuzzier than others, perhaps some will have two versions, each of which are strongly-defined, but debated. The idea is to be able to present a picture of each city, with all the different neighborhoods, names, and borders represented, with some data processing to coalesce the borders into some sort of consensus.

The coalescing is the hard part, but it's also the second stage. Perhaps I'll get the gathering stage finished up and see if I can get some interest.